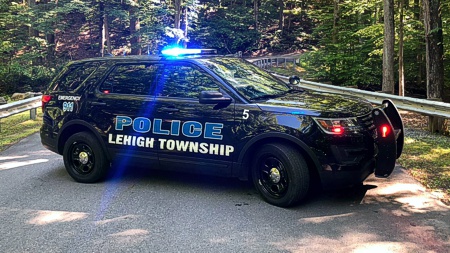 Police Department History
The Lehigh Township Police Department was organized in 1947 by Roland Wieand, who served as its first chief. In the early 1950s the department began providing 24 hour police services. Roland's son, Harold, and his grandson John Klutzaritz, served as subsequent chiefs through 1979.

Chief Klutzaritz was succeeded by Jeffrey Schuler who served as Chief until he retired in May 2012. The current Chief, Scott Fogel, was appointed by the Board of Supervisors, June 2012.

The Police Department added two Sergeants to the rank structure in 2008.

Lehigh Township is a rural area north of the city of Allentown and west of the City of Easton. It covers an area of approximately 31 square miles and serves a resident population of approximately 11,000. The Police Department serves a predominate rural-agricultural community with pocket residential developments throughout the township, as well as several commercial and retail businesses along the Route 145 and 248 corridors.

The Police Department also serves a very large traffic volume due to the township's network of state highways that travel between the Pocono tourist areas, Blue Mountain Ski resort, Allentown & Easton. Route 248 traverses the township and connects all points in Northampton County from Lehigh Township to Easton. Route 145 & Blue Mountain Drive are the main north-south routes connecting the City of Allentown and Whitehall township to Lehigh Township.